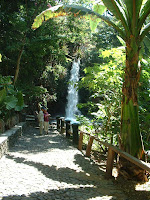 Hola a todos;
Today, we made our first real visit to Uruapan. (We'd only been in the bus station back in 1991.) Various amigos Mexicanos had urged us to make a visit.
This is my "trip report".

It was a very nice trip. We left here just before 10 a.m. and went by the "libre highway" to Sam's Club, arriving about 11:30. The route is very scenic, but winding. We didn't have too much trouble finding Sam's, as it is on the eastern outskirts of the city, all alone for now, except for the newer Wal-Mart Supercenter a couple of 100 meters away.

After a quick recon of the Sam's Club store (almost empty of customers at noon on Wednesday), we got a cab for $30 MXP to the Parque Nacional Eduardo Ruiz, on the western side of the city center. It's a nice street, for the most part, fairly upscale. The park entry fee is $12 P for adults. There's a central placita upon entering, with a fountain and pool of water. Various trails go off, descending over cobble pavements to scenic vistas of cascades, cataracts and quesadillas stands. Other nosherai are available, but we saved our appetites for a comida corrida in centro after our walk.

We were immediately impressed by the tranquility of the park, accented by the rush of water coursing through both natural and manmade channels and falling from various heights. The bird songs were like those in a Tarzan movie.
There's a lot of artifice enhancing or detracting from (depending on your point of view) the natural phenomena, but it's a very Mexican experience, one worth savoring. There are small groups of musicians here and there, waiting to play guitars and violins, or even a harp, to your delight (and for a fee.)
Souvenir and gift shops dot the sides of the trails. Some of the crafts, particularly the clothing, looked very nice, but I only glanced at them, as we are not artesanías shoppers.

The only letdown of the basic, self-guided tour of the Parque was the "Rodilla del Diablo". It's a bit of an uphill walk on stairs and trails, over picturesque bridges, culminating in a spring pool. Their is a modest depression in a now dry streambed that is said to be the kneeprint of the Devil.
"What the Devil!" I exclaimed. "We walked all the way up here for this?" (Just kidding, for the walk was more interesting than the anticlimactic kneeprint.}

Close by a convenient and clean restroom was an exit from the Parque, near the Hotel Mansíon Cupatitzio, one of the four star hotels of Michoacán. Somewhat pricey restaurants line the cobblestone streets, which we passed up in favor of a recommended restaurant in Centro, Cocina Económica Mary, which has been in business 26 years, and has accumulated quite a sizeable, loyal clientele.

We walked down Avenida Independencia to to the restaurant at #57. I was surprised that it is as big as it is. It is really more of an established restaurant than the home-base cocinas económicas we've been to before. It has real, wooden furniture, and paintings on the walls, including an charming mural representing La Vida Michoacana idealizada.

For a mere $35 MXP, we chose from an extensive selection of dishes. Susan settled on Sopa Crema de Brócoli; I had one of the best Sopa Tarascas in years. It had a bean puree base and a touch of tomato. (There is, IMO, no "Authentic" Sopa Tarasca, because it is an invention from the last century.)

Our main courses were Pechuga de Pollo Relleno for Susan, which was a thin, rolled chicken breast stuffed with carrot, raja de chile Pobalno, cheese, (and get THIS: A strip of hot dog.) However, as the hot dog strip was tasteless, it didn't hurt the total dish, and the sauce was quite good.

I had something less frou-frou: Chuleta en Guajillo. It was a thin, boneless pork chop in an orange colored chile guajillo and tomate verde sauce, notable for its piquancy and tartness. There was a basket of hot tortillas to mitigate the sting. Our very amaible waiter told us the Purépecha name for tortillas, but if I tried to relate it here, I'd mess it up.

We drank a small jarra of Agua Fresca de Piña. There were about 4 other flavors available as well. I also had a beer.

Dessert came: a substantial wedge of pastel de elote, which although good, was impossible to finish.

Our bill was $96 MXP before tip. I would recommend this place, if what you want is solid fare, good, quick service; few frills, but well prepared food and above all, "económica".

After, we walked to the Hotel Plaza in search of puros (cigars), but the tobacconist's was not closely attended in this rather fancy, business person's hotel, and I didn't want to commit to purchases without a chance to look over the merchandise.

We then walked along one side of the long, 3-part Plazas, and over into a side street to the Café de la Lucha, a famed, 60 + years old establishment, whose characterful atmosphere is only slightly marred by twin frappucino machines. We enjoyed our cafés cortados, generous pulls with a light milk foam on top. The coffee is aromatic and a bit acidic, with a thin body.
Next door is the merchandise side, where I bout a medio kilo de café en grano entero, y dos paquetes de tablillas de chocolate amargo.
This concluded the touristic aspects of the visit, and we got another cab alongside the Plaza to take us to Sam's Club. (This time, only $25 MXP.)

At Sam's and neighboring Wal-Mart, both stores were very quiet and nearly empty of customers, especially compared to the corresponding stores in Morelia, where we usually shop. I consider that quiet a blessing.
We got what we needed, and this time, headed back to Pátzcuaro and Las Cuevas by the Cuota highway. Oddly, the transit time was about the same as the route on the Libre.

Some friends had described Uruapan as ugly, gritty, and devoid of attractions. While it's true that it's not as polished and spiffed up as Morelia, nor as charming as Pátzcuaro, it has a real world feeling to it. Most of what I saw I enjoyed.