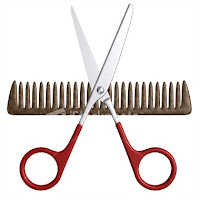 I am not a vain person. So it is, that I prefer to spend a minimum of money on personal grooming. For me, it's whatever gets the job done.
Soon after our arrival in the Pátzcuaro area, our first landlords recommended a hair stylist. Guillermo is a fine gentleman, but in my mind, his skills were wasted on me. Let's face it: I just don't have that much remaining hair to warrant paying $70 to 80 pesos per haircut.

Neither do I want to go to extremes. Along one perimeter wall of Pátzcuaro's mercado are barber stalls of varying elaborateness or primitiveness. I'm not sure, but I think you can get shorn for about $20 pesos. However, the ambience of those places no me llamaron la atencíon.

I found a haircutter's shop on the side of the Plaza Chica which seemed to specialize in children's haircuts, judging from the colorful seats in the form of ponies, boats and airplanes. They did a pretty good man's haircut for about $30 pesos. But then, it disappeared. Out of business, replaced by a sombrero shop. What could be more appropriate?

Up around the corner, on Calle La Paz is Estética La Paz. It's one big room, staffed by attractive señoritas and señoras. How could I pass this up? They are efficient. I can go in, sit down, and emerge 15 minutes later all cleaned up.

I even trusted my neck to their razors. At the previous place, I was afraid of dire infections that might be transmitted by razors. At La Paz, (and probably at the others) I realized that they used a fresh, disposable blade for each client. (A side benefit is that it's not exactly an unpleasant experience when the lady barber applies the warmed, soapy solution to your neck and ears. Mmm.)

We'd not planned on visiting the local cemetary this year, but Alejandro, María's youngest son, accompanied by Socorro, a young woman friend, came to our house to invite us. About 30 minutes later, Javier, the 15 year old son arrived to tell us that the invitation was for the day, not the night, and that we should bring something to eat.

Perfect. I was about to put two raisin challahs in the oven. We could bring one of those and a dozen cinnamon rolls I'd made earlier.

The weather was beautiful, clear and warm. We arrived as Padre Serafin was beginning the mass. It was a long service.

Meanwhile, kids were running around playing on the wall, and a nieves vendor was doing a good business outside, on the road. It seemed as though limón, in a lurid green color, was the favored flavor.
After the lengthy reading of the names of los difuntos, we gathered by the stone wall for our lunch.

The picnic, organized by our friends and neighbors, was nearly as simple as it gets: frijoles de olla, sopa de arroz, chicharrón en salsa amarilla. I hate chicharron en salsa, but I was able to get some crunchy chicharron and thus avoid the slimy stuff. María and Rosa sang a very long hymn about Mary, Queen of Heaven, as they helped prepare lunch.

I broke the freshly baked Raisin Challah, saving the Cinnamon Rolls for a dessert. I made a point of saying a few words about the Latin origins of the Spanish word, "compañero/a". Compañeros are literally those who share bread with each other. The cinnamon rolls were especially coveted by our friend, María, but she "released" them so that others could share.

Little Carina asked me why I'd brought a camera but wasn't taking any photos. I told her I'd doubts as to whether it was respectful to take pictures in the cemetary. (That little girl is very perceptive and outspoken. She has now told us that she wants us to teach her English. I bet she could do it, too, if you could suppress her boundless energy for 30 minutes.)

She gave me the ok to photograph;"you can do that here, no one minds". That was confirmed by an adult.
The visit was climaxed by her discovery of a fat green, caterpillar, accompanied by girlish shrieks. After making sure everyone saw the creepy grub, she daintily folded a napkin around it and stepped on it. Bleaah.

After we left the cemetary, I felt renewed and revived. However, those feelings were short-lived the following day, as we began to itch from numerous chigger bites. I suppose they are another reminder that we are made of mortal flesh.

Posted by Don Cuevas at 4:13 AM No comments: