We Love Casona Rosa in Morelia

The Centro of Morelia has many hotels and B & Bs from which to choose. Where to stay depends on one's tastes and budget. We love staying at Casona Rosa.
For several years, we've watched the growth of first, Casa Rosa, and now, of Casona Rosa. They've come a long way from the first two cozy bedrooms and cute but tiny kitchens, formerly located down the street from the present location.

Five Years on the Rancho

July 1st marks the fifth anniversary of our renting our house here on the Rancho. September will mark our 6th anniversary in the Pátzcuaro region. Our first house in the area was "ready to wear", a completely furnished 2 bdrm, 1 bath, lvg/dng rm houselet on acres and acres (I should say, "hectareas") of land. It was in a vacation club called Quercus, on the road to Santa Clara de Cobre. 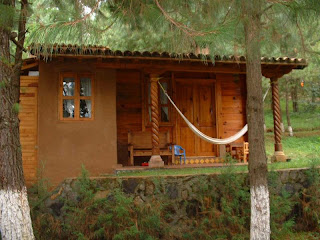 While it was a cute house, the thin, wooden walls were uninsulated and we passed our first winter there, freezing our butts off.

In April, when our 6 month agreement expired, we moved into the grand, rambling, tile encrusted house of an Arkansas expat friend, close at hand to the ferrocarriles of the Tzurumútaro Choo choo. We lived there and cared for it for a little over 4 months. It had a few problems, which I won't go into here.

Along about June, 2006, we were looking up and down the streets of Pátzcuaro in search of new quarters, as we expected our host to return in late July or August. With the possible exception of a duplex apartment on Gringo Hill, all the houses we looked at were tortuously constructed, some with hazards such as stairs of uneven height, and low concrete beams ready to clobber the head of the careless. There was a skinny shower room installed inside a pillar between the kitchen and the living room. The neighborhood wasn't all that nice, either.

We also visited a country cottage out in a peach orchard. It was even further away and higher altitude than our Quercus cabin, and worst of all, the skinny kitchen was like a utility room. At least the view was great.

Then I met an expat at the Men's Tuesday Breakfast named Mel O'Hara. He suggested that we come out to see the two houses available for rent where he lived. It was 20 minutes out of Pátzcuaro Centro. The Internet, delivered by microwave towers, was sketchy. But one house was passable all right, and the other amazed us. We knew almost immediately that this was it. The house was well built, and the setting was beautiful. The then drab exterior belied the well finished interior.

The house has changed over time. Our landlords put up a new, tiled roof, at their own expense, and then when I proposed that we pay to have the house rewired (so that I could run a toaster oven and the microwave oven at once), they paid for 90% of the costs.

The local people have welcomed us. We attend many of their fiestas. We've also been to three funerals. Through these blogs, and through my Picasa web Albums, I've become the photo chronicler of the Rancho. The people who have emigrated to the Other Side (the U.S. border) enjoy seeing local events commemorated on the Web. Next wednesday, we are invited to a Graduation comida. I was asked to please bring my camera.

We have no doubt. This is the place. The right place. 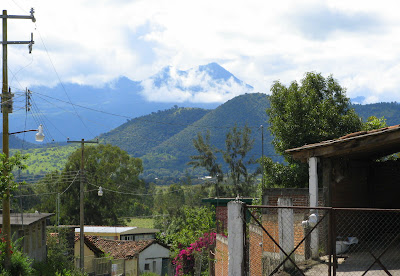