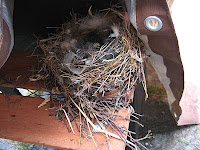 We returned to Michoacan last Thursday, after a three week visit to the home of my parents and sister in New Jersey. It might be called a return to the nest, but, truthfully, it wasn't. I had never lived in that house, other than during our annual visits.

This visit was difficult at times. My parents are aging and my father is not well.

I'd left the nest in the 60's, when I went off to a rather irregular college experience. I'd always been the independence seeking one. What could be more independent than to later retire to a small ranching pueblo near Pátzcuaro, Michoacán?

Our Continental Express jet banked over a corner of Morelia, then homed in on the airport, located in the green, rain-refreshed valley northeast of of the city. From the window I glimpsed the broad expanse of Lago Cuitzeo, shining in the late afternoon sun, just over the ridges to the north.

We landed, and after a brief passage through Migracíon and Aduana, we were greeted by Nacho, our driver.
After loading the trunk with with our luggage, we rode off into the glorious sunset. I was animated and energized, until fatigue eventually set in on the hour and a half drive home.

A couple of days later I was cleaning the porch. Long, thin twigs littered the floor.

The mystery was solved when I went to move the barrel grill. There, on the utility shelf of the grill was an abandoned swallows' nest, under the shelter of the tarp. The only evidence of occupancy was a few wispy feathers.
Posted by Don Cuevas at 7:46 AM 3 comments: