I was reading Steve Cotton's blog the other day, and encountered this blogpost on siestas.
Then, I left this comment:

Same Life--New Location
Tuesday, April 20, 2010
sleep glorious sleep
Don Cuevas said...
I must have naps, due to my long engrained baker's habit of arising in the early morning hours. It's when I do my best work, that is, after a mug or two of strong Chiapas coffee.

In my real experience, bakers arrived at work sometime between 2 and 3 a.m. There's a certain special feeling of belonging to an exclusive club.
(Snort!)

When I arise from those naps, no one should engage me in any meaningful conversation until my brain has returned to normal velocity. I just can't process anything that requires more than a grunted response. The amygdala rules.
Think of Steve's crocodle post, above.


JOINING THE CLUB
first, you have to adapt to the schedule; sleep is always on your mind


When I started my first real bakery job, my hours were 3:00 a.m to 11:00 a.m.
I wasn't at all sure I could adjust to that reversal of my sleep cycle. I recall an August afternoon nap on a camp mat in the air conditioned living room of our bungalow in Springfield, MO. I was desperately trying to get some rest before I had to arise at 2:00 a.m. I was only partially successful.
Now, after many years of working similar hours, I can go back to my previous sleep routine only with the greatest difficulty.

planning a proper lunch/breakfast is important


I want to tell you something about working in a medium to large retail bakery in the early morning hours.
Often, when I arrived at the loading dock entrance and entered the bakery production area, the two senior bakers were sitting on the flour sacks taking a break and eating bologna sandwiches on white bread. Always white bread. When I expressed a preference for rye or whole wheat, Chester, the older baker, who resembled W.C. Fields, would poke fun at me with comments about my "whale blubber sandwich on kumquat toast." Funny guy. That's only a sample of his humor.


One of my first jobs as a Baker's Helper was washing sheet pans and other things as called upon. Getting mild electrical shocks when washing the outside walls of the walk-in freezer was an eyeopener.


It was a big moment when the senior bakers called me over to the bench (work table) and invited me to help make donuts. My assignment was to pick the cut holes from the big sheet of dough sprawled on the bench. It was a monotonous job, enlivened only by Chester's jesting, making funny faces, teasing the cake finishers, general ribaldry and hilarious parodies of popular Country and Western songs.


They sheeted the dough through a big machine and cut out the shapes with a die cut roller, and I got to pluck the holes. Somehow, that task would cause my mind to wander. It would often wander to the eastern Missouri Perry County Karst Plain. (PDF, 1.6 MB) Hundred, perhaps thousands of sinkholes...endless cavities, stretching to the horizon. 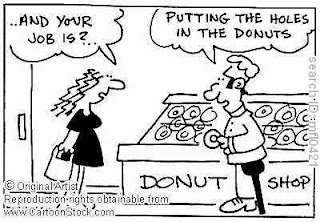 Later, when I'd graduated to the point to where the trusted me enough, they took some time off and I was left alone in the bakery production area, mixing, kneading, sheeting, cutting and still plucking those thousands of donut holes. It was a big step and a big responsibilty. But it was easier for my mind to wander at 4 a.m. when I didn't have that crazy, crusty old baker banter to keep my mind on the job.


flubbing up can be hazardous


A few mishaps occasionally resulted: like the sugar cookie dough one morning. "Emmett; it just doesn't look right." —I phoned the head baker at 4:00 a.m. on his day off.
"Did you put the sugar in?"— he asked.
No. That was what was missing! Mixing in the correct amount of sugar nearly instantly corrected the problem.


Then there the big floor mixers. These are not your Kitchen-Aid table top mixers. They are powerful machines. I think one was an 80 quart and the other a 120 quart capacity, with electric lifts.

As the bowl rose, it canted forward, threatening to spill the unmixed contents onto the less than pristine floor, as the mixer rose from the floor on its legs! (This was a hard to achieve feat.)
I was sweating, you bet. After I calmed down, I was able to fiddle the mechanism to safely lower the bowl to its round, wheeled dolly.

After experiences like those, quitting time at 11:00 a.m. was welcome, and then home to lunch with a beer then some sleep. (Breakfast had already been eaten while sitting on the bags of flour in the bakery. My usual, of course: a whale blubber sandwich on kumquat toast.)


This is not the end of the story, but sufficient for now.