The Cave Digger documentary movie is a tale of an independent creative artist. This post is not about the movie, but instead, about trying to get a valid download of the same.

I decided yesterday to rent a copy of the Cave Digger movie, from the Apple iTunes Store. That was a big mistake. Although the rental was only $4.99, I was mightily frustrated and bummed out when, after the download, that messages appeared saying that a certain display compatible with Digital Rights Management was necessary to view it. I had less than 24 hours to figure that out. Later, after a lot of "drilling down", I was able to submit a complaint to Apple iTunes Store. For what it's worth, maybe I'll get a chargeback to my credit card.  What pissed me off was that as far as I could see, there was no warning about the special requirements on the iTunes movie downloads page. Plus, it was difficult to locate the video file on my drive. I found it with a Spotlight search on my Mac, but to no avail, as I couldn't play it. Apple, and the iTunes bloatware made me feel technically incompetent.


I went back to bed, then later decided to look on the Amazon.com site for the same movie. There it was. I decided to splurge, and I rented it, albeit as "SD" rather than "HD". (The difference I dimly understand.) Almost immediately, Amazon asked me if I wanted to view the movie right away!. I thought that was incredibly generous, and I started to watch it, uninterruptedly.

When I checked my mail in-box, there was an email from Amazon giving me a $1 credit toward the purchase of an MP3. That, IMO, makes for a very satisfactory customer experience.


With which company would you prefer to do business? At this point I'll hold my rather extensive negative opinions of Apple. I have been a long time Apple loyalist but now I can rant on for a long time about Apple's current negative aspects.

Here's a trailer for the movie.


The blindness has been taken away. We have lived here in Michoacán for 9 years, starting with cold and getting colder and colder. You can rationalize as much as you like, but it's cold here in winter, and no amount of delusion can make it warm. We are living in unheated houses! This is lunacy. What were we thinking?

Yes, we have portable space heaters and warm blankets but their reach is limited.

What's the answer? Maybe we need to move somewhere like Melaque.

Global warming is a joke in Michoacán.

Posted by Don Cuevas at 3:12 AM No comments: 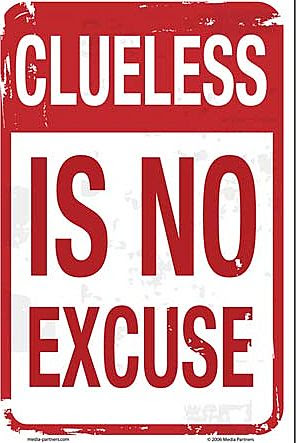 
Twistems (wire ties for plastic bags): Hate 'em. Can't live without 'em. Sometimes pure hell to untwist from the neck of the bag because *someone* has double twisted them. Then there are those that are too short or too stiff to be easily removed. Others are found in the bottom of the chest freezer, having *spontaneously*, of their own accord freed themselves, as the contents of the bag spill into the cavernous depths of the freezer.

And there's the old standby: not to hard to remove, perhaps, but WhereTF is it when you want to re-close the bag?

My policy when cooking or baking is that any twistems removed from bags get placed *off* the work surface. Hardly anything is worse then finding a wire tie in your slice of bread.

Despite my loathing for twistems, we have to ask friends to schlep some in their luggage when returning to México from los Estados Unidos. After all, we wouldn't want to ever run out of them. Twist ties are only now barely debuting in México. Most plastic bags here are closed by twirling the bag and its contents into a usually unassailable knot, the bag openable by ripping or assaulting it with scissors.

In the end, twistems are our friends, although difficult ones, as they help to keep foods fresh and to prevent ants and other insects from entering and eating our foods.

Posted by Don Cuevas at 7:56 AM No comments:


Below are a few of my observations, acquired over time in Mexico, of the role privacy plays or fails to play in public restrooms in various locals, such as bus stations. If you are sensitive or easily offended, I suggest that you go read another blog. This one will lay it out the way I see it. If you are ready, Read On>>

The Fickle Finger Strikes and Moves On

I occasionally read about scams played on tourists, but until recently had personally avoided and escaped the shame and distress. About two weeks ago we were successfully scammed by a taxi driver.

Toward the end of our first week in Oaxaca, we hailed a cab passing in front of our hotel, an older vehicle in poorer condition, driven by an older man.

Usually, I prefer to sit in the front passenger seat, but didn't do so this time because there was a small tool chest occupying that space. I got in the back with my wife. It was uncomfortable, as the front passenger seat back was inclined rearward and the seat as far back as it could go. The taxista got out and did something in the front passenger side, which didn't relieve the crowding in the rear. He indicated to me to open the rear right door. At that moment, he grimaced and held up his left hand to show that he'd caught his finger in the door. (I was puzzled how that could happen when opening the door, but...)

Despite this apparently severe, sickening injury, he still wanted to take us to our destination. We were disheartened and didn't want to continue. He told us not to worry, it was an accident, "no pasa nada." During the ride he made no sounds of pain. His finger truly looked broken, although the skin was unbroken and there was no blood.

He put either his radio mike or cell phone between his left shoulder and chin and talked at length with someone, about where we were going, the finger accident and arranging treatment at "una clínica particular." —a private clinic—

He didn't seem to have very good knowledge of some of even the major streets. I had to direct him. (Could it be that he wasn't a taxi diver at all?)

When we arrived at our destination, he was very careful to pull over and courteously directed us to exit to the left in order not to be hit by oncoming vehicles!

When we started to pay him the fare, $40 pesos, he asked for $3000 pesos "para la curacíon". Up to this point, we believed that it was a real and very distressing accident, Now doubts entered. We told him that we don't carry that much money, but we gave him $500 pesos*, which he took, looked thoughtful, nodded and drove off.

*Some of you may ask "Why would you pay him?" Because we just wanted to get clear from the psychological and physical distress we were having.

We crossed the street and entered the restaurant in a truly dejected mood. We weren't sure if it was a real injury, or a scam to get money from gullible tourists like us. We now speculate that he already had an old finger injury and was using it to get extra income, but we can't say for sure. In either case, it was really upsetting for us and possibly very painful for the taxista.

In retrospect, we conclude that we were scammed for sure. The driver is awarded the Fickle Finger of Fate for his subtle, devious psychological ploy.

Posted by Don Cuevas at 6:31 AM No comments:

It's been said that there are No Stupid Questions, but what happened Sunday morning puts the lie to that cliché.
Note that no one is identified by name or description.

I was seated at the Sundays only, family operated barbacoa stand on the corner of Calle Aldama across from Hotel Casa Arnel, where we'd spent the previous two nights.

A couple of New York women stopped and asked me some questions. One women was considerably older and seemed to have acute failure of common sense. The younger (50's?) was sharper, yet even she nearly drove me into a surreal state of mind.

I'm sorry that I can't perfectly reconstruct the dialogue, but here are a few of the high(?)lights. Try to imagine their frequent interruptions to my answers as I tried to answer their questions.

There was more of this sort of inanity, and when I got away, I felt very sad for my native land and the city of my birth.

To their credit, they did remark on the charm of Barrio Jalatlaco, but I had to wonder how they managed to find it. I wonder if they found their way out.

Posted by Don Cuevas at 6:10 AM No comments: