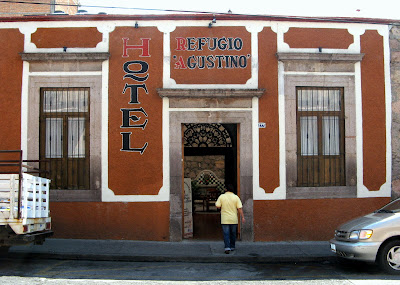 Morelia's Centro has many hotels, but there seems to be a sort of magnetic convergence of older and newer ones in and near Av. Galeana, Allende, Aldama and Abasolo.

One of the most recently inaugurated is the Hotel Refugio Agustino, at Calle Aldama # 272, just off Ave. Abasolo.
It's bounded by Málaga, a juice bar, to the east and a Happy Go convenience store to the west. The o.k. Tako Tako Taquería is across the street.

The following review is about Suite # 7, which rented for $550 pesos during the Day of the Dead period, normally about $50 pesos less. Standard rooms rent normally for $450 pesos, making this a good value, considering the quality of the furnishings.


The Hotel is a converted charming Spanish Colonial building with seven rooms. It’s very nice with few deficiencies. There are modest but charming Colonial decor touches throughout: wooden beams, brick ceilings, walls of cantera stone, brick arches. All in good taste, without being overwhelming. Our room was a suite consisting of an ample bedroom with a king bed, a very long, well constructed dresser about 3 meters in length, with mirror, better than average lighting and ample wall switches and outlets; a small kitchenette area with a stainless steel sink and drainboard, a microwave oven and a small cupboard; a tiny breakfast table and kitchen stools. 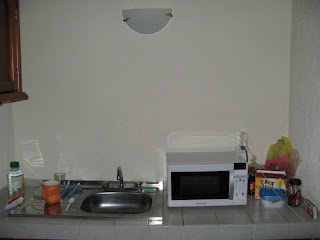 There’s no refrigerator nor any drinking vessels or dishes, other than a couple of glasses out by the water dispenser in the hall. You’ll have to bring in your own food, as there’s no food service in the hotel. But there are many food establishments nearby.

We had ample closets and storage space, although the closets are peculiar in that the hanger rods are at right angles to the norm.

The bed linens are above average in quality and we slept comfortably. There was some ambient noise through the patio doors, but it wasn’t bad, and after all, noise is almost inescapable in Mexican cities.

The bathroom is small but adequate, with a modern flush toilet and lavabo. There were a couple of minor flaws: the vertical stainless steel inlet pipe of the lavabo was not mounted firmly and wobbles a lot when touched. Another, minor detail is that the towel hook swiveled loosely. Not a big problem though.

The attractive shower, just off from the toilet area, in an unroofed stall. The tiled walls and floor are new and very clean. The hot water took about 1 minute to arrive, but when it did, it was forceful and plentiful. In fact, the shower, along with the comfortable king sized bed are among the highlights of suite #7.

Note that as a retrofit, the bathroom is in a partially unroofed box constructed within the suite. The toilet area is roofed in relation to the rest of the suite, but the shower area is not. There’s also a translucent plastic skylight in the ceiling over the shower and part of the bedroom.

A really nice feature to Suite # 7 is the small, private patio, accessed by attractive wooden sliding doors. There’s a small table and a couple of chairs. It would be a nice place for breakfast or afternoon drinks. (You can also dry your socks and undies out there by draping them over the patio furniture.)

However, considering the large and uninsulated expanse of the sliding wood and glass doors, I would not want to have this suite in the dead of winter.

The standard rooms are compact but appear adequate. They are arranged for the most part on two levels, a small sitting room below and in at least one, low ceilinged, bedroom loft, up a set of short, broad wooden stairs. 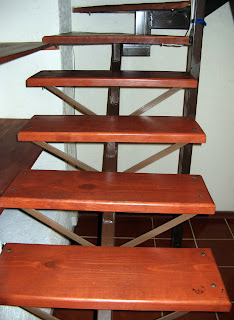 When I stopped by in August for a quick look at the hotel, the low ceilinged upper level was a little stuffy. I would not choose a room that faced the street, because of the noise. There's at least one other suite on the upper floor, which overlooks the lobby, with a Queen bed. Price is the same.

The most serious flaw in an otherwise lovely small hotel was the temporary (?) lack of Internet connectivity. Wireless Internet is advertised as being available in the lobby area. However, when I was given the password and I tried to enter it in my mobile device, it wouldn’t connect. After some time, Banessa ("with a B"), the friendly receptionist, told me that the router was broken, in fact, “burned out”. I was lucky to have access to Wifi at our friend Rosa's Casona Rosa, 2 1/2 blocks away, but it was nevertheless an inconvenience, and not available to everyone.

Here are some informal ratings:


View Larger Map
Posted by Don Cuevas at 4:21 AM 4 comments: