From the archives of Surviving La Vida Buena comes this relic, freshly dusted off for viewing. Since this post was conceived, I have learned that Flash does not work on an iPhone or iPod Touch, which is somewhat limiting, but perhaps a blessing in disguise. Perhaps we can look forward to it not working on the iPad.

About a year go, while browsing the useful pages of wikimapia.org, I found the Hotel Pal near Metro Station Balderas where Lineas 1 and 3 cross. The location seemed a long way from the usual Centro Histórico attractions, but as we found out, we were able to walk to the "Centro Centro" in 25 to 30 minutes. Having the Metro Station on the corner, near 3 Banamex ATMs, was a real advantage. The other attraction was price.

I'm not sure how they can offer such tremendous value at modest prices, but I think one way is to eliminate costly frills, eg, there's no bellman staff. The lobby is attractive but minimally furnished with a few easy chairs and a sofa.

The non-uniformed reception staff was business like and correct. They work from behind a large, heavily glass window.

There is a restaurant and bar, but we didn't eat there, as we had other dining interests in the area.

While we were there, a large tour bus group of older Americans or Canadians arrived by for one night.

The maintenance and hygiene are impeccable, and it's clean to the point of looking sterile. Our room was simply but pleasantly decorated. 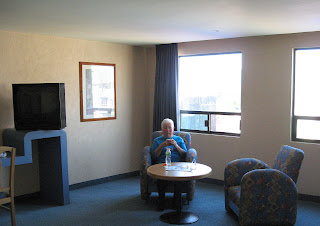 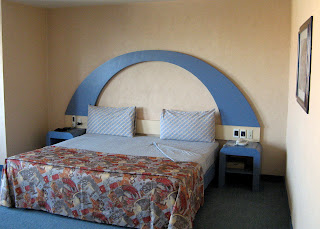 I have to mention that the free wi-fi in the room and lobby worked well, and for those guests who didn't bring a laptop, there are two well maintained PC's with Internet connection in a glassed in area to one side of the lobby.

The huge bathroom of our Master Suite, on the 4th floor, was a highlight. The floors were faux marble, and in addition to the usual equipment, there was a bidet and a 2-person jacuzzi tub. (Unfortunately, it took 25-30 minutes to fill adequately, which made me feel guilty for wasting water.)

The capacious shower stall supplied forceful and plentiful hot water. We never had less than 4 or 5 big bath towels. The bath amenities were basic but adequate.

The main bedroom-sitting room was even larger and had a good, firm king bed, nightstands, a desk, a desk chair, a small round table and two wing chairs. The closet was open style, but had many hangers. There were no drawers of any sort in the suite, but the night tables had undershelves.

Illumination was adequate from recessed spot lamps. There were two large windows, which partially opened, and well shielded by heavy curtains. There was some noise at night (music) from the buildings behind the hotel (some of which are humble tenements) but the noise usually subsided in and hour or so. A friend stayed in a streetside, single room, and he had no trouble sleeping, he said.

The TV remote control did not work, and was inconveniently bolted to the wall next to the bed.But since we don't watch much TV, it was not a big problem.

The neighborhood seems safe enough, at least in daylight hours, and we walked everywhere to the north and east, reaching the Centro Histórico in 25 or 30 minutes. However, I didn't want to make the same walk after dark. The Avenida Arcos de Belén looked fine, as did Av. Balderas. Calle Luis Moya might be o.k., but I wanted to stay away from the areas near Mercado San Juan and east to Eje Central 3 (San Juan de Letrán) after dark. We took a cab back after dinner at Restaurante El Huequito in Centro, and it was only $16 MXP.

We found most basic services within a 2-block walk.

The Ciudadela Artesanias Mercado is 2 blocks away. Mercado San Juan of specialty foods, about 8 blocks.

We will definitely stay at the Hotel Pal again when in Mexico City.