The Green, Green Grass of Home* 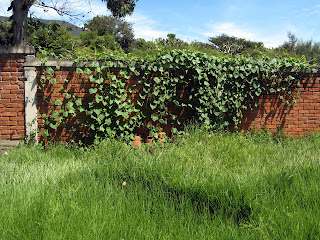 Our usual summer schedule for lawn cutting is about every two weeks. It's normally done by our landlord's father, Mateo, using a "huiter", ie; a weed eater.


This year we were away a total of six weeks, with only 12 days between visits to the U.S. Although Mateo has access to our yard, he and his wife, Chucha were in San Jose, California even longer than we were.

So it was when we returned from the final segment of travel in New Jersey, we found a Bonanza of Lawn Greene (*That was the original title of this post, but I took pity on my readers.) in our yard. It was nearly waist high out back, as the grass is always greener by the septic tank.

After nearly a week back home, I went out and located Sr. Candy, who had occasionally cut our grass when Mateo was away. He took a look at the elephant grass out back and told us that his huiter couldn't handle it. But he knew a couple of muchachos, one of whom had a disc cutter huiter.  We agreed on a price, and the crew showed up here on Saturday morning. 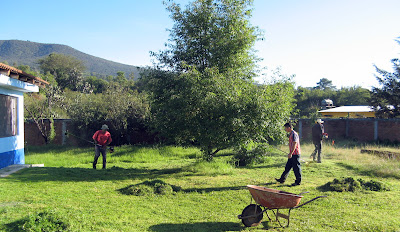 They went at it with two huiters and a rake, as well as a wheelbarrow. They also removed a tangle of chayote vines from the brick wall at the north side of the house. By 10:30, they had it done, other than the walkways that needed sweeping.

Most of the clippings were deposited outside, at the base of our wall along the street, but they workers also hauled off a truckload with which to feed their cattle. 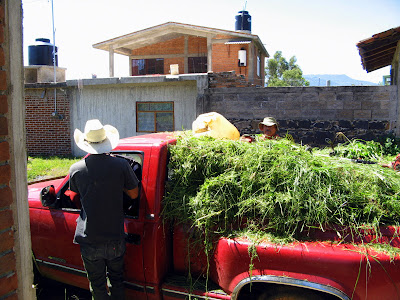 We paid them, shook hands, and watched as the faded off into the morning sun. 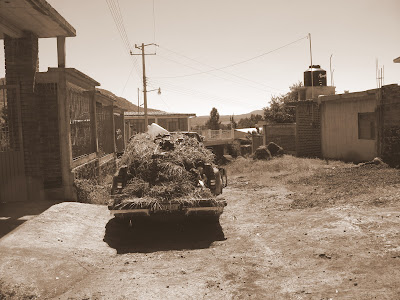 And now, for your further entertainment, here's our title song, as sung by Marty Robbins (I tried to get Merle Haggard, but EMI Publishing had restrictions on it.) Click here to hear Merle sing it, on YouTube. The best one, so far, IMO.

For those who prefer, here's a much younger Joan Baez singing of the GGoH.