A friend gave me a brief note yesterday, suggesting that I'd like this new word, "cabañuelas".
The note reads: "Cabañuelas= the first 12 days of January. Tradition says that the weather during these days indicates the climate during the 12 upcoming months of the year."

If the tradition is true, then we are in for a wild and windy time of rain interpersed with hail and mitigated by rainbows.

After nearly two weeks of unseasonably rainy January weather, the streak seemed to have broken yesterday. Though here at la hacienda the world was covered in fog, it cleared by mid morning and the rest of the day was bright, sunny and less cold. There is hope.

Alas! I just looked outside and there are ominous dark clouds to the east. 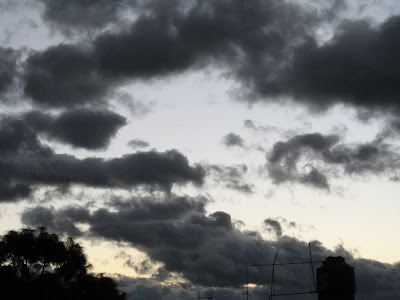 It's probably his fault. (I don't understand this next picture, other than it's a "Wanted" poster. I found it in a Google images search for cabañuelas. 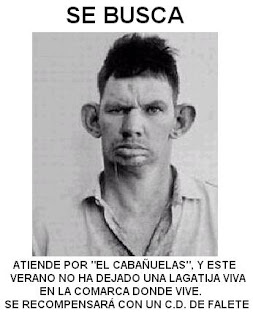 What's So Great About Pátzcuaro?

"Uriel" put this question last week to one of our local forums, Michoacan_Net.


What is so great about Patzcuaro? Why do people want to travel there? The ice cream ("nieve") isn't all that great. There isn't much to "really" see. Or maybe i haven't seen the greatness of Patzcuaro.

This elicited a flurry of replies, many tinged with indignation. Most made references to a "warm fuzzy" feeling they had while in Pátzcuaro.

I refrained from answering, as I thought the orginal question more than a little trollish. Besides, why should anyone feel compelled to defend their choice of where they live?

After an interval, our friend, "DrBosque" (who left Pátzcuaro several months ago for the more southern climes) cut through the warm fuzzy haze and replied thusly:

Many of the people we know who have moved to Patzcuaro shared the impression that it just felt right. For most, immediately. I can think of few who would use the word "great," a rather hollow word for a place and culture that's anything but.

It's one of prettiest cities in Mexico, and perhaps the only one that has such an inspiring tree-filled plaza without a church scowling from one end. That earns it a certain greatness in my mind (but then I do tend toward attitude regarding authoritarian religions).

What are you comparing it to? And what caused you to have such unrealistic expectations, that you're so disappointed you have to ask the question so disparagingly?

I replied privately to DrBosque:

I agree, the word "great" doesn't apply. For most of us, it has a nice feel to it. The geographic setting is attractive. You can walk from one side of Centro to the other in 15 minutes; you almost always see people you know. But there are almost no really good restaurants. :-(


The mercado is a true highlight for me. The vibrancy and color animate me. But I wouldn't want to spend more than an hour at a time in there. It can be exhausting.


The historic center's streets and buildings are charming. Outside of a few choice areas, the town is rather less attractive. (See the Libramiento, por ejemplo, athough it's improving.)


I'll add that although we enjoy living out in the countryside, on the peaceful and tranquilo rancho, I need the stimulus of several visits a week to the vigorous and animated scene of Pátzcuaro Centro. A few hours of walking the charming streets, having coffee with friends, shopping, and I'm renewed for a few more days.

Others, who live close in, enjoy gallery shows, concerts, and playing bridge with friends. Everyone finds what they like best.
Posted by Don Cuevas at 6:04 AM 5 comments: 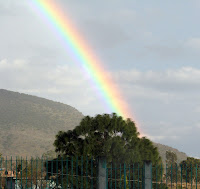 Central highland Michoacán area seldom gets more than isolated rain showers during the months from October to June. This year we've had several rain showers, and today was a soaker.

We were driving home from visiting friends when we saw a partial rainbow along the foot of the ridge. Of course, we could never quite pass under its arc or overtake it.

On the other side of the road, the windbreaks of eucalyptus were austerely beautiful in their clean washed grayness. Sunshine was breaking sporadically through the rain showers, illuminating Los Tres Picos and the other mountains that form the backdrop to the valley.
When we drove up our street and reached our gate, I was amazed by the magnificent double rainbow in the northeast sky. As soon as the car was inside, I opened my camera and took some pictures.
Maybe these rainbows are a favorable omen for the New Year. 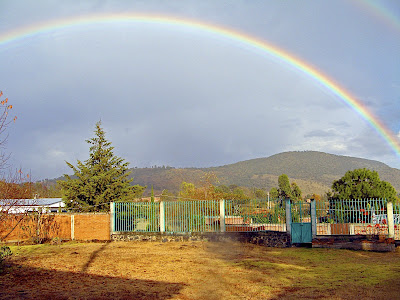 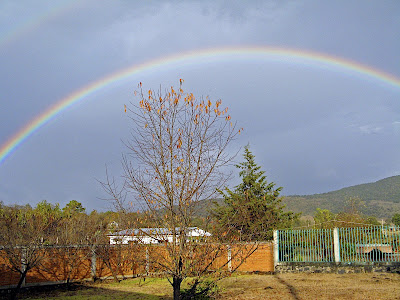