With the advent of Spring like warmth, we at last fulfilled our desire to immerse ourselves in pools of aguas termales. Our top choice for this pleasure are the Grutas de Tolantongo, in the eastern part of the state of Hidalgo, which we visited 5 years ago. However, it's a fairly lengthy trip, so we decided instead to go to the balnearios in the small town of Araró, Michoacán. We first learned of this spot from our friend, Rochelle Cashdan, who lives in Guanajuato.

Araró is situated at the southeastern corner of Lago Cuitzeo, a little northeast of the larger town of Zinapécuaro, Michoacán.

Although Google Map's directions showed Araró to be about 1 hour 40 minutes from our home, we expected that it would take longer, due to traffic in Morelia and that we stopped a couple of times en route. Not unexpectedly, the autopista tolls were a considerable expense. We didn't keep records, but it was pushing $200 pesos each way. Of course, there are free highways, but they are slower and trafficky.  We took a route that passed by the Morelia Airport, which gave us an chance to look into the Restaurante Titanic, a huge seafood restaurant (featuring "jambalaya" on the menu!), but we were keen on getting to our destination so we didn't eat. A mistake.

Route finding was easy until we exited the Guadalajara-México autopista at the Zinapécuaro-Acambaro toll plaza. We missed the sharp turnoff and found ourselves heading to Acambaro in the state of Guanajuato.

But, applying Escherian navigation, we looped back in the direction of Zinapécuaro, asked directions, and got back on track to Araró.

Araró gives the impression of a town trapped in a time eddy. The autopista forms a southern boundary, a mountain ridge the north, and the shore of Lago Cuitzeo the west side. There appears to be one road only down the hill into the town. Signs point the way to Balneario Huingo and its adjoining neighbor, Los Hervideros, just outside the town center.

We arrived very hungry and unprepared, for the food services at Huingo were closed until the weekend. The little tienda sold us a couple of cans of tuna, some galletas Saladitas, and a mini jar of mayonesa. We had brought Boing! fruit drinks, so we had a small feast.

The men's restroom/changing room is adequate but needed some cleaning. The women's was in better condition.

There are a number of pools of various dimensions. I was pleased that those featuring kiddy slides and other juvenile attractions were set apart from the main pools.

There were well behaved children in the main pools, of course. The whole place was relatively tranquil, until later in the afternoon, the PA system started blaring stirring Spanish marches and bullfight music.

Besides the large, luxuriously warm large pool, there's a smaller, covered rectangular pool designated as "Temazcal". The water temperature is 40º C with a depth of 1.40 meters (4 1/2 feet) was what I needed to sooth old injuries. 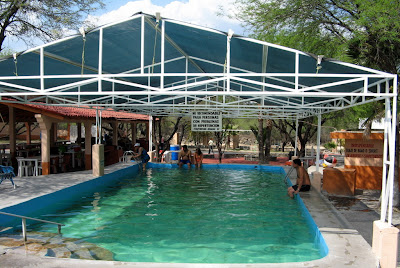 After a few hours of soaking and changing pools, we dressed and left. We were shown a shorter way back to the town center. We decided to stay the night, and after seeing the spacious and attractive grounds of Hotel La Playa y Balneario*, in the heart of town, we took a room at the discounted rate of $350 pesos (asking price, $500 pesos). The room was new, very clean although a little under furnished. We didn't avail ourselves of any of the three pools on the property, but I did dip my hand in two and the water was tepid. 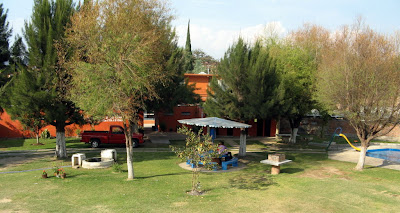 *There's another hotel, across the residential street at the back of La Playa, called Hotel Wesfalia. It's a very attractive building, but we didn't look into it. There are also other, older lodgings, such as Posada Jazmin and Hotel Esperanza, on or close to the main street. In Zinapécuaro is Posada Los Colorines, apparently a more deluxe hotel, associated with the Reino de Atzimba water park.

We are accustomed to nighttime noises in Mexican hotels, thus we were not disappointed at La Playa: chiefly amplified music until about 10:00 p.m.; plus regular gongs of the church** bells, a block away. The baaing sheep were hardly noticeable, underscored by a passing freight train in he near distance. I didn't realize until morning that we had our earplugs along.

** The church is very attractive, noted for El Señor de Araró and its fiesta, which, I think we just missed.

In the morning, I tried the promised agua caliente las 24 horas  in the bathroom and it delivered! It was a great shower, one of considerable force and abundant hot water.

Getting something to eat was a challenge. We saw two restaurants and a comedor económico in town, and none were open during our stay. We ended up eating passable tortas at Lonchería Guerrero and its neighbor, across the main street from el mercado de artesanías.

We bought bread and cheese at a tienda, but didn't eat it until we got home on Thursday. We stopped in Morelia for a decent lunch.

We enjoyed our brief visit to Araró, and will go again. Next time, we'll prepare better and bring some snacks.