We have just returned from a 4 night stay in the small, tropical, Pacific coastal city of Zihuatanejo, in the Mexican state of Guerrero.

This trip was out of character, as I especially have not liked beach resorts in the past (I was bored to irritation), and we are both averse to steaming hot locales. (One of the big attractions of the Pátzcuaro area is that it's seldom hot.)

Lately, however, the onset of cold weather here in the Michoacán highlands plus a desire for a change of scene, impelled us into taking this brief trip. I theorized that an air conditioned hotel, in a city with numerous restaurants and shops nearby would appeal to me more than a "chill" beach scene. (Chill beach scene, if I understand that phrase correctly, is a place of hammocks under palapa shape huts, where you lie around, drink coconut water mixed with gin or whatever —neither of us like coconut water—, and I'm good for oh, maybe, 5 minutes chilling in a hammock.)

We decided to travel by bus, an economical and less stressful way than driving. Oddly, no buses go directly from Pátzcuaro to Zihuatanejo; one has to either back track to Morelia or go to Uruapan. Uruapan is the logical choice, as it's 50 miles down the slope and in more or less the right direction. We packed lightly and carried two soft mini-duffel bags and a woven shopping bag. Thus equipped, we walked down our street to the corner, where we waited then caught the combi van to Pátzcuaro.

There's a second class bus stop in lower Pátzcuaro called "La Estacíon", after the long inactive train station nearby. This is a popular transportation hub for buses and combis and taxis. We dared enter the Tortas Pátzcuaro shop, next to the infamous Federal Police Station that got shot up by narcos last year, to buy two tortas (hoagy/sub-like sandwiches) to go. Then we walked a block, waited a few minutes, and got tickets for the Uruapan bus.

The bus is "servicio ordinario", which in other words, means it isn't first class, but it's reasonably comfortable for short trips.

The scenery is beautiful, as the highway winds down the mountain slopes through pine forest and views of extinct cinder cones, then past groves of avocado trees. The outskirts of Uruapan mark the end of the pretty part and the start of the gritty part. It's quite unattractive a place, but the bus station isn't bad. A good thing, as we had over two hours to wait for the next bus. We'd bought our senior discount tickets for the 1:30 p.m. run two days before.

The people watching was above average, and helped while away the time. There's even an operating bakery, where I watched the baker scrape down the dough on the inside of a still whirling dough kneader machine.

From Uruapan, our First Class bus on "La Linea" took us down into the Tierra Caliente of Michoacán and the dramatic mountains around the Presa del Infiernillo reservoir.


Three quite forgettable movies played for our entertainment. (At least, I'm trying to forget the last one, an animated, full-length feature about anthropomorphic eggs, in an Old Mexico desert setting. Although the stark beginning, shaman-haunted and set amongst the buttes and mesas of Real de Catorce was auspicious, it quickly degenerated into mawkish and squawkish silliness.


The autopista disgorged us onto the sunny coast road, which carried us palm thatched huts, cold beer stores and  for about 45 minutes to lovely Zihuatanejo.


The Zihuatanejo bus station has no taxi boleto taquilla where you can buy tickets at a regulated rate. So I was pleasantly surprised when the taxi driver quoted us a rate of $25 MXN to take us to our hotel, Villas Miramar, in Colonia La Madera, a ten minute walk from Centro.

Colonia La Madera is a pleasant, semi residential area, in which most every property is dedicated to the hospitality industry. The principal, east-west-ish street, Calle Adelita, is shady and relatively cooler than the nearby streets across the mostly dry canal that marks its northwestern boundary. There, as in much of touristic Zihuatanejo, English is widely spoken. Prices are often quoted in dollars, but with firmness, you can pay in pesos, which is better for you, the customer.

Villas Miramar was a good choice for us. We are grateful to our friend D.L. Glidden, who told us about it, and gave us many dining tips. The Miramar has two sections, one on either side of Calle Adelita: a "garden view" and a "sea view" section.

We chose the sea view section, which cost us $850 MXN a night (about $66 USD a night, with a 40% discount on the 4th night. It would have been $100 MXN less per night for a garden view room. (These were shoulder season rates, which changes to high season on December 18.)

The room was very spacious and comfortable. There was a small terrace with  a view of the bay and the pool below. There was a small refrigerator; an effective ceiling fan; two double beds, reading lights, an AC unit, a decent bathroom with very ample supplies of hot water, and a telephone, which we never used. The TV had very few channels available, and we had no remote, but TV watching is not among our priorities.

What didn't come with the room was purified drinking water, facial tissues, and instructions for operating the lights. But we bought two liter bottles of water at nearby stores and we eventually figured out the light system.

We were soon into the pool. Not big enough to do laps (like I care?), it was perfect for cool, easy lounging. 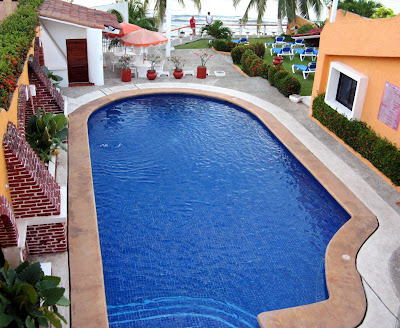 I realize that this post is getting long, so I'll leave it here for now and later, describe our quasi-touristic activities and especially, the restaurants, on My Mexican Kitchen.

Lordy, man, if you two had just gotten into your car and driven there, you would have arrived in half the time and at about the same price (gas and tolls) that you paid with that snail routine.

I´ve been in the Miramar. Actually, all the hotels along that short stretch. Not to spend the night, just checking them out. Some good hotels at good prices, much better than the Las Vegas scene in Ixtapa.

We preferred not to drive this time.
We had sufficient beach time.
We were happy.

The costs for the buses were $290 MXN each way, for two, plus various cab fares in Zihua, one on return to Pátzcuaro.

If we were to do it again by bus, we'd know not to leave home so early in order to catch the 13:20 bus out of Uruapan.

Please tell us where you decided to stay, and why.

We´ve stayed on that beach just once. It was the Don Andres which, I believe, is right next door. We found the rooms nicer. We got a "junior suite" which has a small kitchen, living room and balcony with a sea view. This was 18 months ago. We got it for 500 pesos a night. We stayed three nights.

A friend went back a couple months later, still in the low season, and was given a significantly higher price, so it´s a crap shoot on the price. The listed price was about double what we paid. I liked it, and we´ll stay there in the future unless they get goofy with the price. I think it depends on whom you encounter at the reception desk.

If you have a car, it´s simple to head to the big supermarket (I forget which chain) down the nearby highway to stock up the kitchen. Saves on food bills. We just had lunch at restaurants.

Now, looky: If you´re gonna moderate this blog, you do not need the word verification too! Needless nuisance for your fans.

Sounds good, Felipe. Something to look into for another time. We weren't there long enough to need groceries.

About word verification: I only enabled it because of a recent spate of spam.

I notice your blogs tend to have it on and off at seeming random. What's the story behind that?
(You can reply by private email if you like.)