Used to be that a good test of a Mexico City visitor's savvy was the ability to enter and navigate the underground Metro system and exit relatively unscathed. Now the city has developed an increasingly extensive network of MetroBuses, running above ground.

The system  of fares is based on a smart card. But it takes some smarts to understand how it works. It also helps, as we found, to have friendly, sometimes English speaking fellow passengers who can advise you.

We recently used the MetroBus system a couple of times. The first requirement was to learn how to purchase and load the smart card, which although available in varied, colorful designs, all work the same. But, according to the MetroBus web site, the vending machines may vary. Some automatically issue cards according to the money you put in, while others require you to key in the amount.

Once you have obtained an MB smart card, you can move on to the turnstile and have your card read. With beginner's luck, it will admit you to the bus platform.

That was the easy part. We now ramp up the reto to the reto de las rutas.

In our naïvete, we assumed that each line carried buses on simple, linear routes. Not True.

We were coming from the direction of Tacubaya toward the Nuevo Léon station, where we understood to get down from the bus and walk about a block to a different Nuevo León station. (I have to mention at this point that you are allowed free transfers between crossing lines if done within two hours of your original entry to the System.)

We did as instructed, but the next bus we boarded swung right, to the east, an unexpected direction. We didn't feel alone in our confusion, as a  Chilanga near us was confused as well. But by a miracle, yet another Chilanga knew the ropes of la ruta, and in good English, explained what to do.
For details, read more:

We disembarked to the platform of the next station. There we waited for the "Colonia Del Valle" bus, headed back to the Nuevo León station where we'd gone astray. We spent the waiting time in chit chat and observing the scene, including a young nun bringing a floral bouquet to the pink convent across from us. 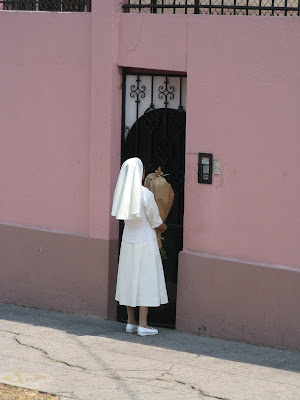 We boarded again, this time a very crowded coach, only to travel about 3 blocks. I was scrunched up to a bicycle, which left dark stains on my trouser leg. At least, I hope that's all it was.

Far more alarming, a few passengers stood in the door "well"". It was alarming, for only two days before, Doña Cuevas had been mousetrapped between the powerful hydraulic powered folding door as it opened, and a vertical stanchion. No one could free her until the driver stepped back and turned an emergency lever. She was uninjured, yet it was a very frightening experience. I had been compressed in a similar incident a few years ago, but while on a very crowded coach.

But in this exit, a different type of door allowed the passengers. seeming at risk, to exit without trauma.

We returned to the Nuevo León station, with our new acquaintance and guide. We then boarded the bus toward Indios Verdes. Our amiga got off at Chilpancingo while continued on to the Sonora Station.

After shopping at the Super Mikasa store on Avenida San Luis Potosí, and walking 25 minutes west, across lovely Parque México, we lunched at Escarapela, Bodegón Argentino. Then, knowing how much new information we could assimilate in one day, we hailed the first libre taxi and had an enjoyable ride back to our guesthouse. Twenty-six pesos, nearly door to door, with an amiable, English speaking taxi driver. All for slightly more than double a MB fare for two. But we'll use the MetroBus again, as we become more accustomed to it.


On Monday, we boarded a MetroBus at Antonio Maceo station and rode it far to the east and south, transferring (without incident) at Etiopia Station, in Colonia Del Valle to Línea 3. 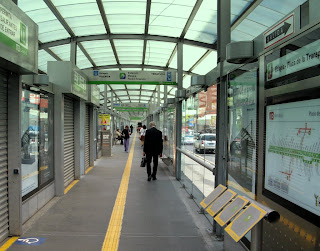 We easily found seats because Etiopia is the southern end of Línea 3. 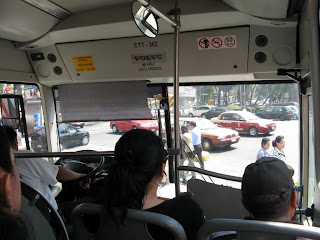 This run took us up across Viaducto Alemán and thence up Avenida Cuauhtémoc, turning eastward on Avenida Chapultepec, then northward on Avenida Balderas. We are familiar with that area, having stayed at the Hotel Pal near the intersection.

On Balderas, we continued north to Estacíon Júarez, we we got off. From there it is about a half mile walk to our goal, the Mercado San Juan area. Total fare for each of us was $6 pesos, including the free transfer*.

Again, after comida, we wisely chose to take a taxi back to the guest house, as we were carrying heavy purchases. The fare was barely $40 pesos. There's a time for the MetroBus, and a time for the taxi.

*As we understand it, two or more (?) passengers boarding on one MetroBus card get only only one free transfer on that card. If two passengers use separate cards, then both transfers are free, within the previously described limits.