The Fickle Finger Strikes and Moves On

I occasionally read about scams played on tourists, but until recently had personally avoided and escaped the shame and distress. About two weeks ago we were successfully scammed by a taxi driver.

Toward the end of our first week in Oaxaca, we hailed a cab passing in front of our hotel, an older vehicle in poorer condition, driven by an older man.

Usually, I prefer to sit in the front passenger seat, but didn't do so this time because there was a small tool chest occupying that space. I got in the back with my wife. It was uncomfortable, as the front passenger seat back was inclined rearward and the seat as far back as it could go. The taxista got out and did something in the front passenger side, which didn't relieve the crowding in the rear. He indicated to me to open the rear right door. At that moment, he grimaced and held up his left hand to show that he'd caught his finger in the door. (I was puzzled how that could happen when opening the door, but...)

Despite this apparently severe, sickening injury, he still wanted to take us to our destination. We were disheartened and didn't want to continue. He told us not to worry, it was an accident, "no pasa nada." During the ride he made no sounds of pain. His finger truly looked broken, although the skin was unbroken and there was no blood.

He put either his radio mike or cell phone between his left shoulder and chin and talked at length with someone, about where we were going, the finger accident and arranging treatment at "una clínica particular." —a private clinic—

He didn't seem to have very good knowledge of some of even the major streets. I had to direct him. (Could it be that he wasn't a taxi diver at all?)

When we arrived at our destination, he was very careful to pull over and courteously directed us to exit to the left in order not to be hit by oncoming vehicles!

When we started to pay him the fare, $40 pesos, he asked for $3000 pesos "para la curacíon". Up to this point, we believed that it was a real and very distressing accident, Now doubts entered. We told him that we don't carry that much money, but we gave him $500 pesos*, which he took, looked thoughtful, nodded and drove off.

*Some of you may ask "Why would you pay him?" Because we just wanted to get clear from the psychological and physical distress we were having.

We crossed the street and entered the restaurant in a truly dejected mood. We weren't sure if it was a real injury, or a scam to get money from gullible tourists like us. We now speculate that he already had an old finger injury and was using it to get extra income, but we can't say for sure. In either case, it was really upsetting for us and possibly very painful for the taxista.

In retrospect, we conclude that we were scammed for sure. The driver is awarded the Fickle Finger of Fate for his subtle, devious psychological ploy. 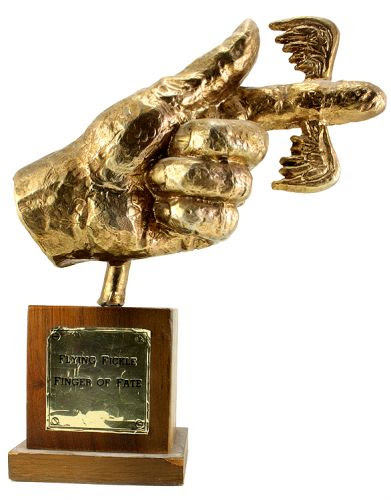