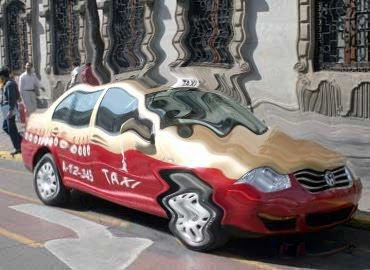 During the many years we've visited and lived in Mexico, most of the taxi rides we've taken were free of any unusual incidents. But there have been some exceptions.
The stories you are about to read are true; only the names of the drivers are omitted because we never knew them. No crimes were committed, but we have been subjected to pendejadas. In the following series of Twisted Taxi Tales, up to five Pendejada Points (¶) will be awarded to qualified taxistas.

Cd. Júarez bridge crossing, 1990s.
On a return to la frontera at Cd. Júarez, our driver took us to the International Bridge, going against considerable traffic in an attempt to get quickly to el otro lado. This was memorable as the bridge arches up in the center, and it's difficult to see oncoming traffic. He then asked drivers in the correct lane to let his taxi shoehorn in, and one complied. But Mexican border officials phoned their U.S. counterparts, and he was turned back and made to go to the end of the line.
¶¶¶


TAPO to  drop off in unknown barrio of México City Centro, 1990s.
We returned from Oaxaca, and at the TAPO bus station got an official taxi ticket at the booth. Once outside, we were directed to a taxi with the radio blaring loud music. We politely asked the young driver to turn it down, and he sullenly complied. Once out on the streets, he turned it up again.

After a while, we were stuck in heavy traffic on a side street with vendors' booths on both sides. Our driver turned to us and said, "We have arrived". I knew that was BS because I was very familiar with our destination. I insisted that he continue, and we eventually we got to the right place. We made a show of writing down his taxi license, but he turned it so we couldn't see it. "Don't do that, I'll lose my job!" he wailed.
I replied that if he wanted to keep his job, then he shouldn't try to drop off his pasengers in barrios desconocidos.
¶¶¶¶

Terminal Norte to Centro; First Day on the Job. 1990s
We got off the bus at Mexico City's Terminal del Norte, a day or so before Mexico's ndependence Day. Our very young and friendly driver told us it was his first day on the job. He did all right, too, and got us to a spot nearly under the ceremonial bleachers on the west side of the Zócalo. We walked, carrying our packs, the 5 blocks to our hotel.
¶

Jerkaround routes: two in one afternoon! Monday, January 31, 2011.
Colonia Roma Norte to San Juan Mercado. How it ought to be done; here. Our cab's route instead went here. (The route shown is somewhat exaggeratedly inaccurate as even Google Maps couldn't parse the insanely illogical route we took. But it's not far off from what happened.) The topper was that upon entering Paseo de La Reforma. we were delayed by a massive demonstration, but the tránsitos helped us sidle by.
¶¶

San Juan Mercado via Alameda to go to Mojing Comida China. The walking route here. (We thought it was distant, but it wasn't. Eight blocks, maybe. We didn't want to walk with our shopping bags full, so we hailed a cab.)
Our cab's intended route here. When we got to within 1 block of our destination, I asked that we be let out. In all fairness, that taxista may have been doing the best he could with the convoluted one way streets, but I also have to say that he was also trying to take us to Hong King Chinese restaurant rather than the one we wanted. Hong King is only about 5-6 blocks from where we hopped into the cab.
¶¶


Fortunately, the last cab driver of the day, who took us back to the hotel didn't play any games with us. Just with traffic regulations. He turned down a one way street, crossed back through a gap in a construction divider, later ran a red light, and got us back in good form. Those maneuvers are acceptable to me, because they got us to our destination quickly and cheaply.

To conclude; it's not even the negligible padding of the fare which irritates. It's the inconvenience, waste of time, and above all, sense of helplessness.
But, you know what they say: "Ni modo."

Bring it on. But that's a Mexico City taxi. I hope this will be a more free-ranging look at things.

PS: Oh, I see the events were farther down the post. I'm not fond of this "read more" element to posts. Let it all hang out at the get-go, I say. I confuse easily.

Most of these events took place in el D.F.

I just added the date to the most recent ones.

With some effort, I also was able to make the map with the red link more realistic.